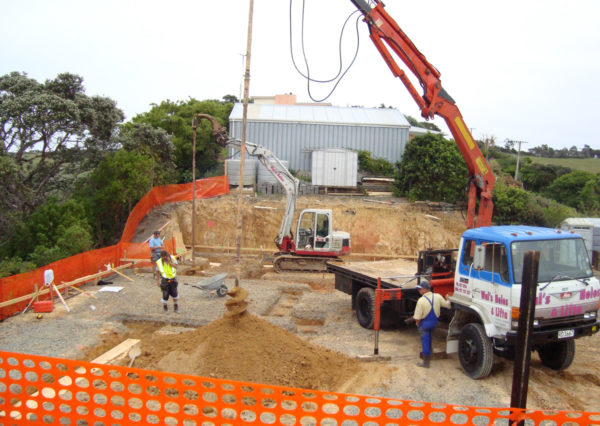 Drilling holes is how Wal’s Works, formerly known as Wal’s Holes, began back in 1984. While we now do a lot more than just drilling holes, it still is a vital part of the services that we offer. Our auger attachments allow us to bore holes from 150mm up to 1m in diameter and up to 4m in depth. We also operate the only 4WD HIAB or crane truck in Northland. It comes with an auger attachment that enables the vehicle to reach out to 10 metres to drill holes as deep as 13 metres and up to 1 metre in diameter. Much of our HIAB’s work is drilling offal holes, but our general hole drilling includes plenty of other jobs.

Also referred to as dead holes, offal holes are commonly used on farms to dispose of dead stock, home kill waste and rubbish in a hygienic way or as a long-drop. If not buried in an appropriate manner, decomposing carcasses can release disease-carrying microorganisms that pose a health risk to humans and an environmental risk to the surrounding land. Once the offal hole is dug, it will be covered with a reinforced concrete cover to reduce smells and make it safe and dog-proof.

Similar to offal holes, soak holes are mostly used to dispose of wastewater. They were most common before stormwater systems were introduced and still provide a great alternative for those that don’t want to reuse their wastewater without causing too much harm to the environment. Soak holes act as filters by collecting stormwater or wastewater and safely discharging it back into the surrounding soil which at the same times helps increase groundwater levels. Nowadays, they are mostly used for septic tank soakage or as an overflow.

Commonly used to hold up foundations on driveways, pathways or houses, retaining walls can also help create terraces of usable land on slopes for additional living or outdoor space such as gardens, lawns or general landscaping purposes. In addition, retaining walls will help slow down the flow of rainwater, thus increasing the utility of your gardens and lawns. In landscaping, retaining walls are often used to add additional seating in a natural environment.

Soldier piles are a common type of retaining wall and suitable for commercial and residential use in home constructions and foundation repairs.Holes are drilled into the ground in regular intervals, then filled with H-shaped steel or concrete beams to stabilize and secure the surrounding land. Between each vertical pile, horizontal support is added to help spread the load. Soldier pile retaining walls are usually more cost-effective than conventional ones, easier and faster to construct and suitable for a wide range of soil types.

Pole building was first used in the US in the 1930s mainly for horse barns and agricultural buildings. Even today, pole sheds, implement sheds and other pole structures are commonly used in the New as they provide a quick and cost-effective opportunity to set up outbuildings or shelters for machinery in various industries. Pole foundation systems have also become popular for houses especially on sloping sites.

Wal’s Works can also undertake site investigations for an engineer’s report. If you need a hole drilled, for whatever purpose, contact Keith and his highly experienced team today.